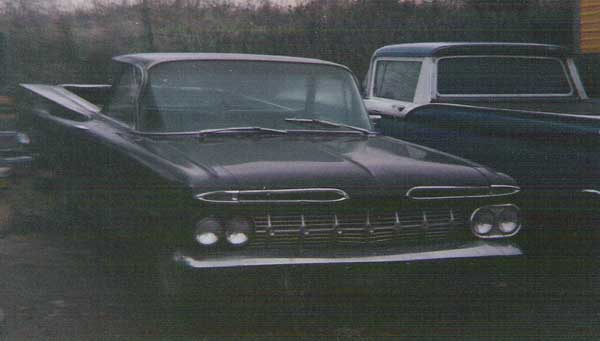 I always wanted a '59 Chevy, especially an Elky. Whenever we went to the states I kept a lookout for one for sale. Third time lucky, I bought this truck in 1991 from an 'actor' in Burbank California for $600. Weren't much to look at; it'd been drag raced in a smalltime way, no interior and a hole hacked in the floorpan for a stick shifter. The sheetmetal was fairly straight & rustfree  though  and the engine looked fresh (it turned out to be a 327 from a '64 corvette) although it couldn't be started as the owner had connected the battery backwards and fried the wiring!

Back in the UK, it had to sit there until August 1993 before I could get to starting work on it. Here it is stripped to the bare shell & chassis. Originally a blue & white car, as you see. 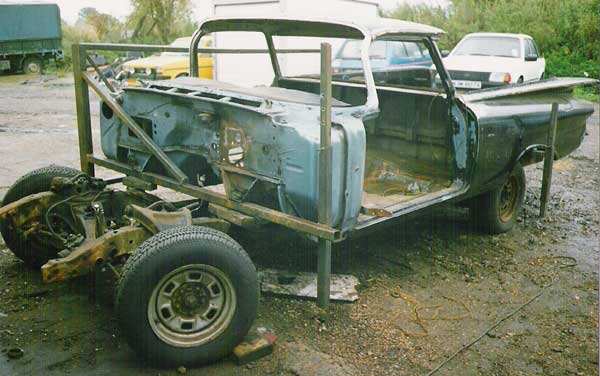 I fabricated & welded in new floorpans and did all the upside repairs before making this rig to lift the shell off and roll it on its side... 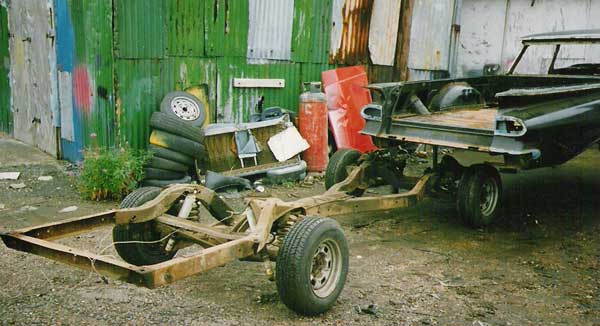 There's the chassis, seeing daylight for the first time in 34 years. The chassis members were found to be stuffed with walnut shells, presumably by a rodent of some description! 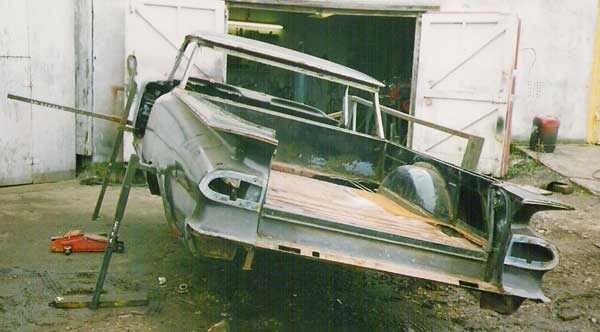 Me & John McCrae persuaded the body up & on its side with 2 trolley jacks, an oildrun & a pile of old wheels!

It went over & nothing broke. Either on the body, or us! 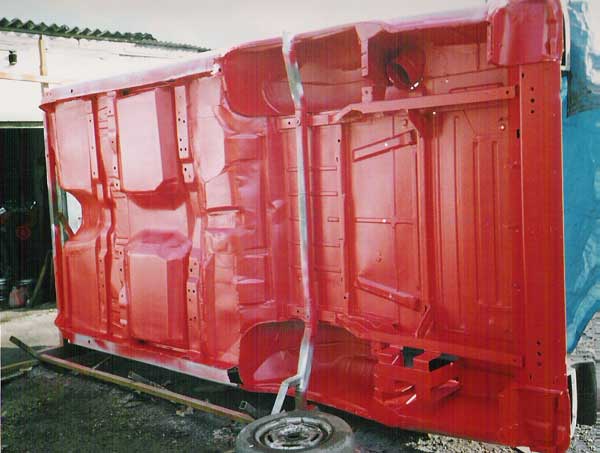 A week or so later, the welding done, the whole underside primed, stonechipped and painted. Eventually I went over it all with black Waxoyl. Note the battery carrier relocated behind the RH wheelwell

Most Elkys were pretty basically equipped as standard. Although you could order power brakes, power steering and so on, few did. You didn't even get an anti-roll bar, and nobody had heard of disc brakes in 1959 USA! Whilst resto sources and the aftermarket can supply fixes for most of this, its not cheap, and I wasn't flush with cash.

But engineering & fabrication makes up for money. I used a '76 Chevy Nova for parts. It now has discs, a power steering box, an anti-roll bar.

Back from powder-coating and all re-assembled. While it was away, I got the body shell prepared.

And plonked it back on! 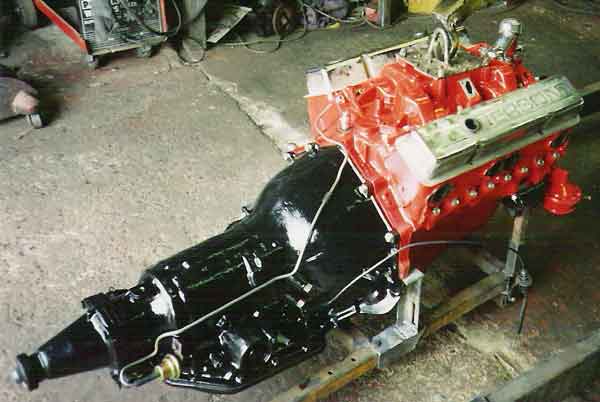 I rebuilt the engine, although it turned out to have been recently redone, I more or less just put it back together as it was. A TH350 trans was bought & I rebuilt it. My first time for re-doing an auto, I didn't notice the pump was worn and it failed again due to low oil pressure. I then paid to have it rebuilt properly!

Here's the engine & box going in. This would be mid 1994. The rest of the bodywork was re-assembled and by early 1995 it was ready for paint. I used a friends workshop for this but made a complete cock-up of it, with runs everywhere!

Meanwhile, another project was taking up the majority of my time; the start of CCD! There was no way of getting a car into the new workshop in Waltham Abbey, so it had to stand outside, and although much work was done on it over the next 3 years- exhaust, wiring, and finally getting it running & driving enough to be able to move it about- the paint situation stopped a lot of other things being done, and worse still, rust started bubbling thru in a few places.

Moving to Norfolk in '98 it still had to sit outside and deteriorate further until we finally got a double garage up in 2001. 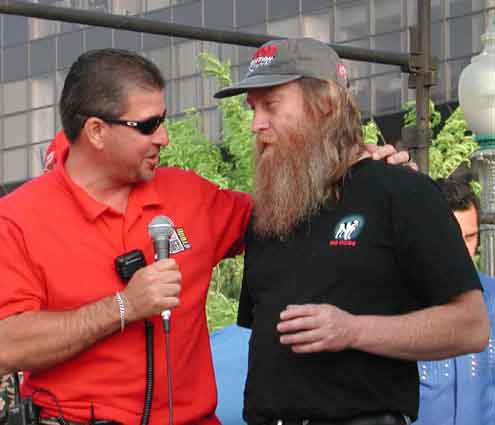 In May 2001 we went for a holiday in the US doing the Hot Rod power tour, an annual event where hot rodders drive cross country together over a week or two. This time it was down the route of old Route 66, (more or less) starting in Detroit and ending in San Bernardino. We bought an 80s T-bird in Chicago, and did the drive. At the finish there was a draw for all the participants, for 3 or 4 prizes. Guess who got lucky? Totally gobsmacked, (seem to have mislaid my beer!) here's me up on the stage being awarded a brand new 350 HO Chevy engine! The bloke from GM gulped a bit when it was realised that I was from England, but manfully drawled 'we'll take care of the shipping'. (unclear about whether it was GM or the magazine who picked up the tab) 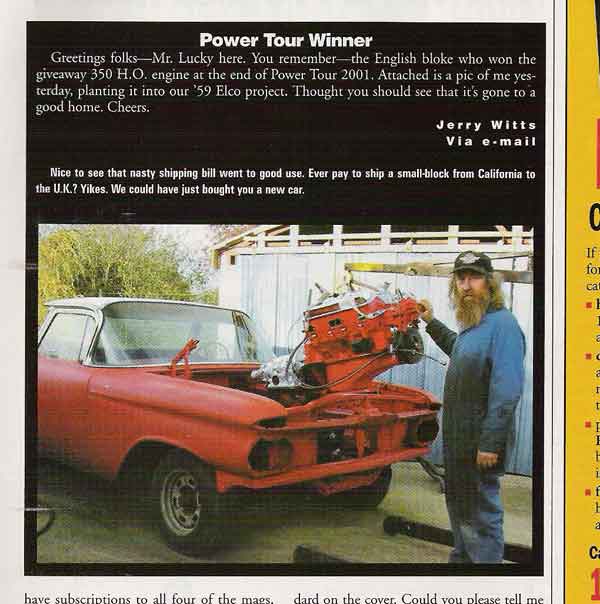 When it finally arrived, (there was some confusion)  I removed the corvette 327 and sold it on, which just paid for the import taxes. In November '02 I fitted the new lump & emailed a pic of me doing the job to Hot Rod magazine. they were kind enough to print it in Feb 03. Probably should have put on clean overalls!

Oh yeah; note to Hot Rod: Calship in Long Beach ship to the UK for $150 per cubic metre!

In June 2004 I took some time off and tackled the bodywork, which was looking bad. I replaced both sills, and one quarter panel and a few other areas. Drag Racer Chris Stebbing in Wisbech took on the prep & paint and did a nice job, getting it back to me, via a trip to Leverington to get the pickup bed 'speedlinered', in January 2005.

The rest of the work was done in two 3-week stretches in the fiirst half of 2005 fitting out the interior and all the shiny trim parts. Tedious stuff made worse by the polishers having got the stainless trim too hot causing fairly catastrophic distortion which was difficult to rectify & still isn't really right.

I got the car MOT'd & registered in June 2005 after a few snafus involving customs paperwork from 1991. The new Chevy engine runs like a dream. I swapped the rebuilt TH350 out in early '06 in favour of a 700R4 overdrive 'box. Which means that I can change the rear gears to something a bit livelier without losing any gas-mileage - its got a 2.73:1 10-bolt in there at the moment, I have a 3.31:1 original one to go in when time allows along with rear disc brakes. 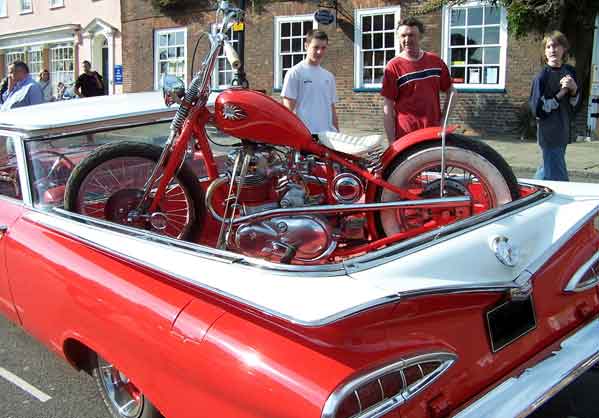 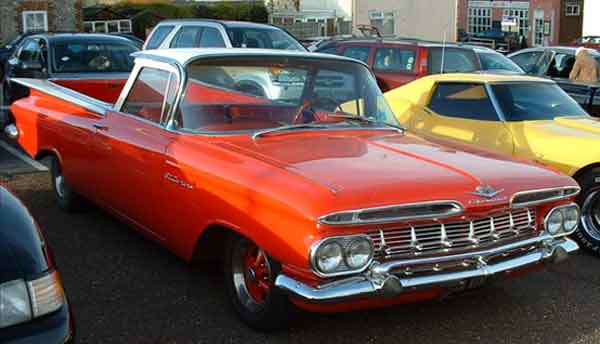